My dissertation research seeks to understand the role of numerically dominant ant species on surrounding ant communities.  I do this by studying the competitive influences and pheromone effects of the common arboreal ant, Azteca trigona, on arthropod communities in Panama.

Role of Azteca trigona on canopy ant access to resources 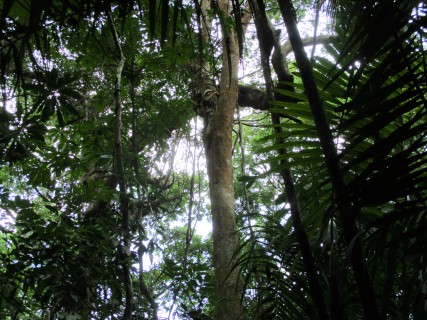 When disturbed, Azteca trigona workers produce a pungent alarm odor which, to me, smells like artificial banana flavoring (although others will argue for blue cheese).  While short-range alarm pheromones attract nestmates over distances of several centimeters, long-range recruitment pheromones can persist for several months or years.  I am studying if Azteca trigona nest odor composition differs from “normal” forest odors and whether nest odors change after a disturbance and over time.  Additionally, I am examining the effects of Azteca trigona alarm pheromones on heterospecific ant behaviors.

Some ants eavesdrop on the trail pheromones of other species to find localized food.  Smaller turtle ant species (genus Cephalotes) will trail parasitize Azteca species.  Almost all other ant species that try to feed on baits with Azteca are aggressively chased away, however the species Cephalotes umbraculatus is commonly observed to feed with Azteca without being detected.  How C. umbraculatus avoid detection is unknown, although likely chemical.  I am studying the chemical production of C. umbraculatus to better undertsand this phenomenon.